How one weekend care turned into something very special 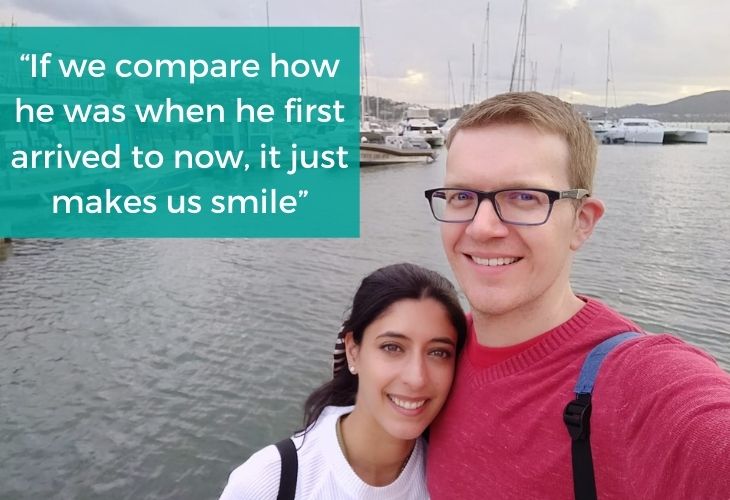 Chris and Amanda have been fostering with Liverpool since March 2020.

As a couple in their early 30s, who work full time and don’t have children of their own, Amanda and Chris were aware that they perhaps weren’t the usual profile of foster carers, but after exploring the possibilities with our fostering team, they were confident it was something they wanted to pursue. It has since developed into something very special!

At our February webinar Chris and Amanda will be speaking about their first 7 months as foster carers, including their thoughts about the assessment process and their experiences so far.

Amanda and Chris started as part-time foster carers, looking after a 14 year old boy for a weekend, which developed into short-term fostering, and after a successful 7 months, they are hoping to progress to long term care for their young person until he reaches independence.

Due to Amanda’s career in mental health, she has seen the impact of difficult childhoods and home lives, not only on children and young people, but also later as adults.

Hearing all the stories, I just wanted to be involved in some way in stopping that cycle and helping children early on

Initially, Chris and Amanda found the uncertainty of short-term fostering a challenge.  They were unsure about making future-plans with their young person, which they acknowledge must have been hard on both sides.  However, after changing their approach and speaking positively about the things they would like and hope to do together in the future, they saw the relationship and trust grow.

“When he first came, for maybe the first month he wouldn’t take his cap off or make eye contact and now we don’t even know where that cap has gone!  Now he’s so chatty and has really come out of his shell so much.  We know so much about him already and he seems really settled and happy.

The idea of not being involved in his future made us feel quite sad, so we are really happy to commit long term”

“If we compare how he was when he first arrived, to now, it just makes us smile” – Chris.

Chris and Amanda were also surprised at how much they have learned already from the experience;

“It’s been a two-way process and we’ve actually learned a lot from him about different things, which is something we hadn’t considered.  Given his age, we can have proper conversations and learn from each other”.

Getting to know each other during lockdown has been harder than normal, with limited options for things to do together;

“We’ve taken an interest in him and the things he likes and just the small things like walking our two dogs together every evening, has really helped and has been a great icebreaker”

Working full time and not having your own children can be thought of as a barrier to fostering, but Chris and Amanda’s story shows that doesn’t need to be the case.

“Not having our own children, meant that we didn’t have any preconceptions about what a child should or shouldn’t be doing.  It has been helpful as we’ve very much been able to focus on him, and what he needs” – Amanda.

“Our assessing social worker was really good, in that when she asked a personal question, she would explain why she was asking the question and what it meant from a fostering point of view.  It was helpful because she gave us an insight into the thought process behind the assessment”.

“We’d really recommend speaking to your employers about the support available.  We were surprised at what was available for fostering, we get carers leave and if we need to take time out for a meeting, they are very flexible”

We’ve told people, that it’s by far the most rewarding thing we’ve ever done. It’s definitely worth looking into