First day at a new school for a fostered kid 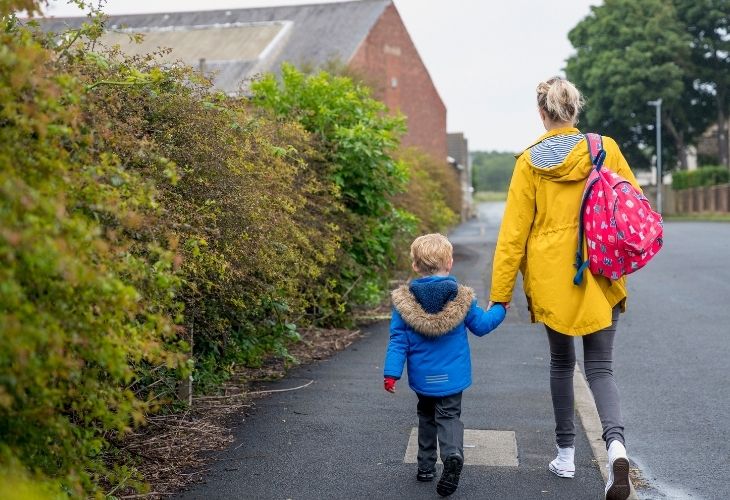 My wife and I were not surprised that The Little Man didn’t want to go to a new school.

Anything new, anything different, anything out of the ordinary would set his ‘Lizard Brain’ into overdrive.

We’d learnt his preferred response to ‘anything new’ if he was in public was ‘to freeze’ or ‘to flop’.

If a stranger spoke to him, for example in a shop, he’d simply stare until they went away.

It’s quite effective, even if it appears a bit rude.

If the stranger continued to probe, he’d put his hooded anorak over his head.

‘Fighting’ could involve kicking, swearing and throwing things was pretty popular too.

He had never resorted to ‘flight’.

‘Flight’ would mean he’d be on his own and he was too scared for that.

My wife and I began to hatch a little plan about how we’d handle the first day of term at his new school.

We’d worry about the second day later. There was little point in getting ahead of ourselves!

The first part of the plan had been to casually introduce familiarity.

We’d taken him to his new school for an open day. We’d shown him the school website. We had engaged in as much of the school’s transition activities as possible.

His new school was a couple of miles away and we drove that way a few times over the summer. We didn’t say we were visiting his new school, rather the pub opposite. We popped in for coke and crisps. We played on the slide. We hoped that the area would appear less threatening. We hoped that we would make his ‘first day journey’ less terrifying.

If you’ve experienced massive amounts of trauma and fear, particularly at a young age, your amygdala will kick in very quickly, often when it’s not warranted.

We hardly mentioned school at all over the summer holiday.

We knew there’d be questions we couldn’t answer, and we knew that would add to the anxiety.

We bought school uniform and equipment via the internet.

We had decided that his new school bag would in fact be his brother’s old school bag.

We’d negotiated with his school, that contrary to some regulations, he’d be packing a variety of fidget toys and favourite phone cases.

The Little Man knew this was happening, but we made as little a deal out of it as possible.

We hid our own fears and anxieties.

We only discussed what we’d do in whispered tones when he was busy watching YouTube clips with his headphones on.

He had some trust in us.

He didn’t need to know that we didn’t know everything, although he probably had his suspicions.

On the ‘big day’, we divided the tasks.

We decided I’d be responsible for getting him ‘there’ on the first morning.

If that went successfully, I’d be responsible for bringing him ‘back’.

We knew he’d respond best if only one person was in charge.

We knew we’d respond best if only one of us had to make the decisions.

Everyone else’s task was to keep out of the way.

We kept everything as low key and as unemotional as possible.

As our birth kids and my wife left the house on that September morning, we avoided any overt show of emotion or goodbyes.

We did not take a ‘first day photo’ on the ‘first day’.

With just the two of us in the house, we got dressed, we ate breakfast, and we watched Paw Patrol.

“We are going now. You can sit in the front or in the back of the car. It’s your choice.”

I knew that giving him some autonomy may help calm him.

His response was the one I’d dreaded but I didn’t let my face show it.

I got the car keys, opened the front door and turned the alarm on.

I left the house and got in the car.

My face was still impassive.

As the 30 second beep countdown urged us to leave the house, he appeared at the front door, walked to the car and got in beside me.

“Please be in charge of the radio”.

He chose the familiarity of Radio 2.

Astute readers will have noticed that whilst our house alarm was on, our front door was still open.

This was a risk I was willing to take.

The seven-minute journey to school passed without incident.

I chose not to speak.

I let Chris Evans and Coldplay fill the silence.

On arrival, there was another minor standoff.

He didn’t want to get out of the car, so I just got out and walked away.

I was pretty sure he’d follow me and I was right.

As we reached his classroom door I handed him my phone.

“I will meet you here when school ends. You can give me my phone back then”.

A few hours later I met him at the appointed time and place.

He returned my phone with a nod.

When he wasn’t looking, I took the SIM card out of my ‘back up phone’ and slid it back into the phone that he’d been minding for me all day. 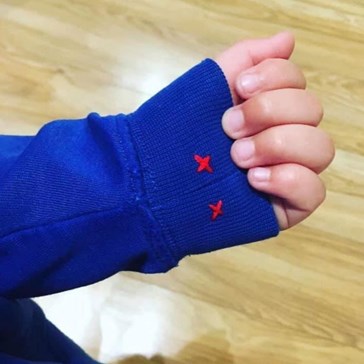 Sowing a cross onto a child’s jumper and your own jumper is a good way of giving them a visual connection to you, and a reminder that you are thinking of them.

Could you be there for a child on their first day?