Yeah, but what about your own children? 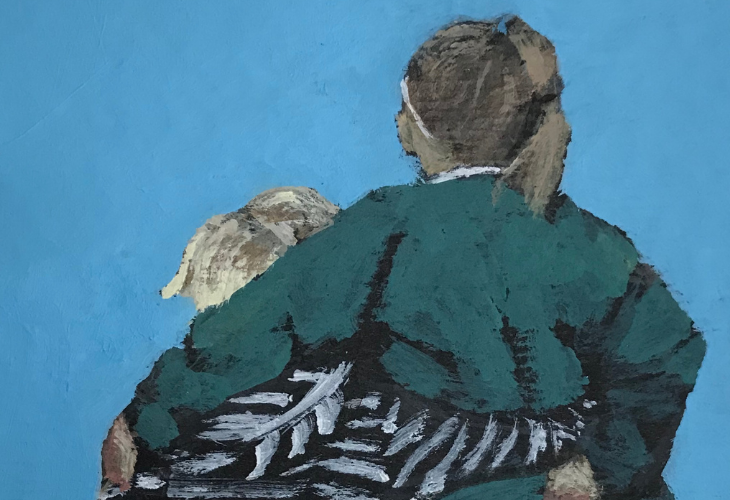 Foster Carer Phil blogs about the role of birth children within a fostering family.

Find a big mirror. Stand in front of it. Trace the image of yourself . If you look like this, you’ve probably done it wrong. 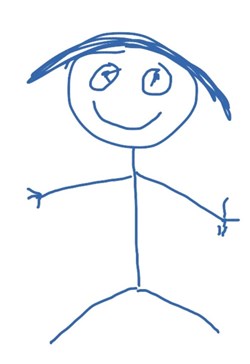 “He’s drawn a picture of himself.

It’s full size, like as big as he is.

And he’s done it with my lipsticks, and they’re ruined.

You owe me new ones”

Our birth kids were 5 and 7 when we started the Assessment Process to become Foster Carers.

They were involved every step of the way.

Our daughter explained that she knew there might be tricky moments with a foster kid but we, her parents, had said that if anything ever got broken or stolen, we would replace it without any quibbling.

Well, that time had come.

The drawing on the mirror was not malicious.

It was just the work of a kid who’d seen himself in a mirror and thought he’d draw himself.

He’d used the nearest thing to hand, some lipsticks!

I reached for my wallet.

My daughter, by now a teenager, and a teenager in a Northern City, took great great pride in her appearance.

‘The lipsticks were Mac, £20 each and they’re all ruined’

So, it cost us £60, but ultimately, very little harm was done.

A positive side effect of fostering is you have to be home for the foster kid. This means you’re also home for your own kids.

There have certainly been some stressful moments, fraught days, and even prolonged periods, lasting weeks, when there’s been significant tension in the house.

Our kids have never felt threatened by a foster kid, generally because they’re bigger and they’re confident. As the adult, you need to ensure everyone gets the time and attention they need.

Fostering has always worked best when the foster kid has been the youngest, generally two or three years younger. The pecking order is clear, and kids generally understand that.

I think the kids we’ve fostered have benefitted massively from having older siblings, even if they’re not related. Our birth kids have been vital in helping our foster kids learn some of the most vital lessons in life.

Our son escorted a new foster kid into his Primary school.

What we didn’t learn until much much later, was that our son and his pals had organised a little rota to go and check on him in the ‘Infant Yard’. 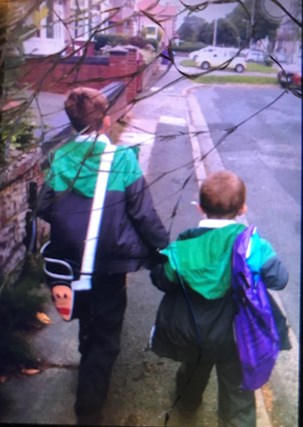 I found this photo on a smashed old phone. The big kid is our birth son. The little kid is fostered. He’d arrived a couple of days before.

‘If anyone had touched him, we’d have sorted it’.

Big brothers are allowed to wind you up, but will often step in if anyone else tries it.

Our birth kids have been invariably protective of the children we’ve fostered.

They understand that not every one has the benefits brought by the accident of birth, and that sharing your privilege is a good thing.

This is an important value to our family.

Kids in a tree. This is our daughter hugging a foster kid, whilst our birth son works out how they’re going to get down. 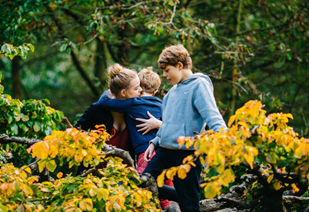 We fostered a ten year old who was very angry.  When he was in such a mood, we’d learnt the best thing to do was to keep out of the way. There was no reasoning with him and an adult presence would only enrage him.

One day he was in such a frame of mind.

He stamped upstairs to go to the bathroom.

Our birth son, by now at Secondary School, was significantly bigger and not easily intimidated.

As our birth son came out of the bathroom, the foster kid took a step back and let him past, in a deferential manner.

This was a golden moment to us.

The foster kid had learnt to regulate himself.

He’d been indifferent to any reward or any consequence when the red mist descended.

However, he really looked up to his big brother with a degree of awe and respect.

He wouldn’t disrespect him, even when he was in the foulest of moods.

He also knew if he pushed past his big brother he was likely to be pushed back.

To all intents and purposes, they were functioning just like two regular, ordinary, relatively normal brothers.

As our birth kids have matured, I think they know they’ve already done some fantastic things in their lives. They’ve stepped in as family for kids who don’t have one.

If they had not liked fostering, we’d have stopped in an instant.

Looking after kids is a family affair and we’re all involved.